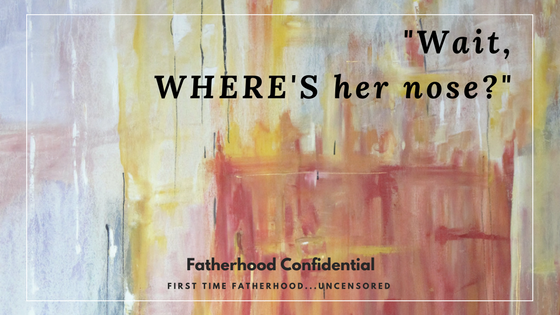 The growth process of a baby in the womb is one of the more amazing things in the world.  It’s also one of the most “what the hell am I looking at” phenomenon’s that anyone will lay eyes on.  When you see those first few sonogram pictures, it’s inevitable that the first words will be “what is that?” followed by, “where’s the baby?”, and then “THAT’s the baby?”.  At this point, the mother (or mother and doctor if you’re at the visit) will give you this look like if you just figured out that 2+2=4.

“It looks like a dot on a black background.”  That’s what the first few sonogram pictures look like.  A glob like figure starts to emerge and then a few weeks later you can start seeing what you think is an eye. From there, you can slowly see the fetus developing in the next few photos. I clearly remember when my best friend saw the first few pictures and immediately said “It looks like a Chicken McNugget.” Ladies and gentlemen, my unborn baby was officially given its first nickname – Nugget.

Nugget continued to grow and soon I started seeing the stumps that would become its arms and legs.  As time continued to pass, I would be eager to see what our child looked like after an additional four weeks.  “It’s a nose! It’s an arm! It’s a BOY!!! YES!!!” Actually no, it was an umbilical cord. At this point the sex of the baby was a secret to us. The big reveal hadn’t taken place yet. After another month, you see the baby getting bigger and taking up more space in the pictures. The arms are formed, you can see the legs bent, and the facial features are starting to form.  This is where it starts to get fun.  I started having THAT discussion with my lady. “Hey babe, looks like the baby is going to have my…” and you insert every single feature because of course, the baby can only look like you (I’m not bad looking, so it’s not a bad thing).

Bigger and bigger, clearer and clearer. That’s what she looks like in the next wave of photos.  She wasn’t an alien anymore, she was a baby.  There were two moments that really tugged at my heart strings.  I get home after work one day and my lady comes up to me and hands me the latest photos.  She laughs and says “yeah, she’s definitely your daughter..what a ham!”  Apparently, my daughter was showing it up and posing for the camera during the visit.  One picture showed her flexing her bicep and facing out (facing me if I’m looking down at the photo).  “FLEX BABY GIRL!!!”  My daughter isn’t even born yet and she has that gym mentality. She was letting me know that she was ready for that gym life! “Check out my guns dad!”  The second time was when she was further along, and I saw her face for the first time.  It was a 4-D photo so there was some distortion, but there she was…my baby girls face! ALL OF THE AWWWSS!! And yeah, it tugged at my daddy strings.  To see my daughters’ face all up in the camera, was definitely a moment to remember.

The photos now at 31 weeks are all about one thing: features. “Yup, that’s my tiny nose.” “Those are her mother’s lips.”  And yeah, from the looks of things, she’s going to have my strong legs and calves.  She also is going to have an affinity for the camera. On top of the flexing photos, my lady has told me that she’s done flips during some live look ins, she’s sucked her thumb, yawned, and opened her mouth as if to say, “Are you getting my good side?”.  It’s been a crazy ride seeing her grow in the womb.  Dot, alien, fetus, baby.  What a journey.

Do you remember seeing your baby’s first sonogram pic?  What was your reaction? Drop a comment below!